January 29, 2022
CHRISTIAN ENTREPRENEURSHIP: WHY AN OTHERS-CENTERED APPROACH IS NECESSARY
By Seed Team

Business strategist, Peter Drucker, often remarked that plans are only good intentions unless they immediately are transformed into hard work. Starting a business or introducing a value proposition is indeed hard work. Intentions comprise a person’s motivation to make an effort to act upon a conscious plan or decision (Conner & Armitage, 1998), and constitute a predictor of planned behavior, especially when said behavior is aberrant or unobservable (Krueger, Reilly & Carsrud, 2000). Because intentions could signal key actions, it is important to examine precursors to these intentions when exploring fundamental behaviors of Christian entrepreneurs. Behavioral intentions stemming from attitudes, for instance, become the immediate antecedents of behavior (Fishbein & Ajzen, 1975). For the Christian, according to Philippians 2:3-4, the motivation should be the following: “Do nothing out of selfish ambition or vain conceit. Rather, in humility value others above yourselves, not looking to your own interests but each of you to the interests of the others” (NIV). The focus of the believer’s actions should not be selfish gain, but the gain of others, i.e. others-centered entrepreneurship.

In a similar manner, entrepreneurial intentions are important because they could tell us whether an entrepreneur will start a business (Bird, 1988). New businesses germinate over time, and involve a considerable amount of planning and effort. Christian entrepreneurship—starting a business with biblical values in mind—could provide a methodology from which other believers can learn to invest in the lives of global citizens. Therefore, entrepreneurial intentions represent a key ingredient in determining the outcome of starting a (faith-based) business and implementing it (Bird, 1988; Bae, Qian, Miao, & Fie, 2014).

Because the academic community is still investigating the elements that shape entrepreneurial behavior, it is important to examine the entrepreneurial intentions of Christian businesspeople. What factors influence a Christ-follower to start a business, and to what meaningful good? In addition, what role do non-cognitive skills play in how Christian entrepreneurs make decisions? One of the non-cognitive skills receiving more attention in contemporary literature is EQ (Harms & Credé, 2010; Quang, Khuong & Le, 2015). EQ represents one instrument in the entrepreneur’s toolkit. Being aware of one’s own emotions, as well as the emotions of others, particularly in early business venture settings when fund acquisition is at play, could spell entrepreneurial success or failure (Ucbasaran, Shepherd, Lockett & Lyon, 2013). What motivates a Christian is critical in shaping the end result of said motivation. In Goleman’s (1995, 2011) original model of emotional intelligence, motivation plays a key role in realizing positive outcomes. Therefore, the research question that this study explores is as follows: “What is the relationship between a Christian Entrepreneur’s EQ and his/her Entrepreneurial Intentions?”

Entrepreneurial Orientation – EO is important, as it has gained much notoriety in the entrepreneurship literature over the last several decades (Slevin & Terjesen, 2011). EO can be defined as “the entrepreneurial strategy-making processes that key decision makers use to enact their firms’ organizational purpose, sustain its vision, and create competitive advantage(s)” (Rauch et al., 2009: 763). The same construct of EO can be used to determine the formative actions of Christian entrepreneurs. These dimensions consist of risk taking, innovativeness, pro-activeness, autonomy, and competitive aggressiveness (Rauch et al., 2009). 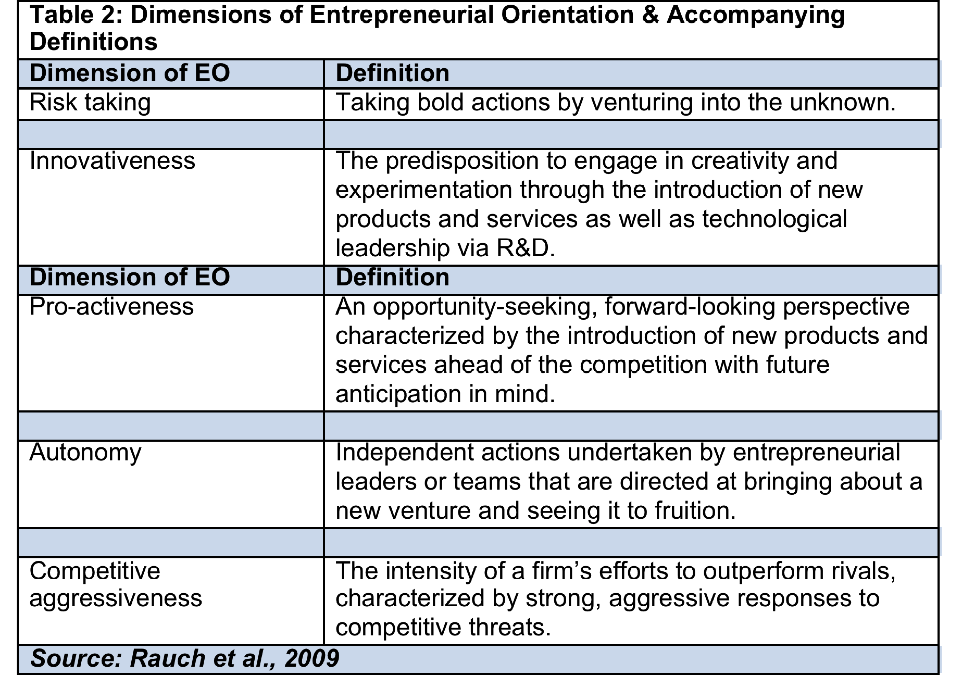 I am motivated to further explore Christian entrepreneurial intentions because of the importance to the global community of believers. One could argue that the early Christian movement, propagated by the disciples and Paul, for instance, was the result of entrepreneurial behaviors such as risk-taking and proactivity. Peter, Paul, John, and others seemed to possess a high degree of individual entrepreneurial orientation as they sought to spread the gospel message of their Teacher. Their intent to disseminate the message of hope was an others-centered initiative, and in applying principles of servant leadership, the result they envisioned was the building of community or “koinonia,” so that those being served also grow and flourish (Greenleaf 1970, 1977). Furthermore, even in today’s highly digital age, although the message of hope has not changed, the means to transmit the message of hope should change by incorporating more elements of design thinking (e.g., innovation and creativity).

There is merit to having a better understanding of the factors that influence attitudes towards social entrepreneurship (SE). SE refers to “the rapidly growing number of organizations that have created models for efficiently catering to basic human needs that existing markets and institutions have failed to satisfy” (Seelos & Mair, 2005). Future research should involve the integration of entrepreneurial intentions and how they shape social enterprise organizations (SEOs) to influence and achieve social goals (Seelos, Mair, Battilana & Dacin, 2011), and how practitioner-scholars can blend the principles of “caritas” (or caring) and problem-solving to effectuate meaningful change within the communities we serve.

Article originally hosted and shared with permission by The Christian Economic Forum, a global network of leaders who join together to collaborate and introduce strategic ideas for the spread of God’s economic principles and the goodness of Jesus Christ. This article was from a collection of White Papers compiled for attendees of the CEF’s 2018 Global Event.

Our desire was to create a community/organisation that helps people work out how to bring redemptive change by developing ideas and initiatives that more fully embodied the good news of Jesus beyond the walls of the church.
← Prev: Meet Our 2020 Incubator Cohort Next: A Redemptive Purpose For Profit in Business →